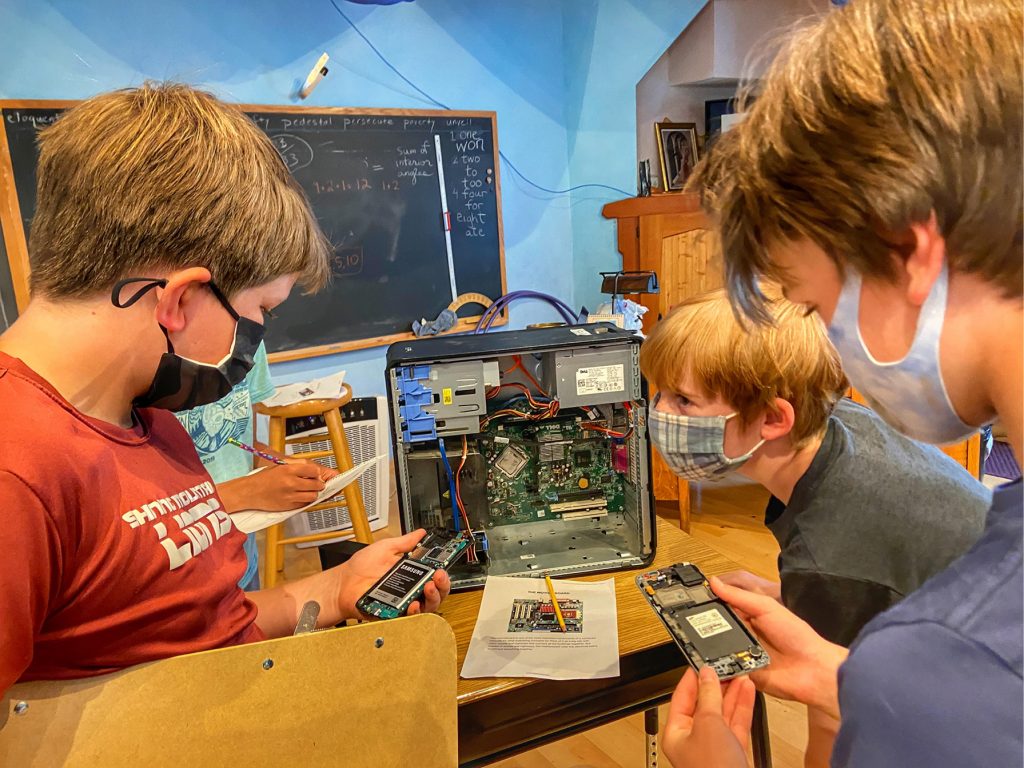 An excited cluster of sixth graders surrounded the table where I’d placed an assortment of devices — an old iPhone, PC and laptop. I was about to remove the side panel from an old hard drive and the suspense was thick in the air. We’d just learned the names of the main components and, as I revealed the colored wires and electronic innards, I instructed the students to remove any parts they could. They eagerly complied.

Today’s Tools
I was teaching a lesson called “Investigating Today’s Tools,” a part of the sixth grade Cyber Civics curriculum. The students’ eagerness to place the sharp-edged computer parts in their hands was fun to watch. These were not the fuzzy, felted wool toys and soft beeswax sculptures that had occupied many of these hands only a couple of years ago. These were hard, modern objects and the students were fully involved in trying to identify them — was this the motherboard, the central processing unit, or the video card? They buzzed and discussed and discovered.

Part of their mood was natural middle schooler curiosity, but with this class, there was something else at play. There was this slightly forbidden feeling of seeing a pile of tech in a Waldorf classroom. After all, Waldorf schools are famously low/no tech, at least in the pre-K through fifth grade classrooms, and this is still generally true. But even those spaces had screens in them during parts of the pandemic, when tech pushed further into our lives as we sought to stay connected.

Middle school is often where it starts, exposure to — participation in and consumption of media and social media. It is common for students to come home declaring, “I’m the only one in the class who doesn’t have [insert the latest device]!”

So the timing of this lesson was perfect. After pulling apart the various devices, each student chose a component to bring back to their desk to draw and then illustrate how they think it works. The objective of the lesson is to demonstrate to students that these devices are merely tools; that it’s how we use them that determines what kind of experience we’ll have, and what kind of people we can
be, online.

Cyber Civics
The Cyber Civics curriculum was developed by Diana Graber, a teacher at the Journey School in California who has an MA in media psychology and social change. She is also the author of Raising Humans in a Digital World, a must-read for any modern parent.

Cyber Civics is taught in 90 percent of North American Waldorf schools and a rapidly growing number of public schools as well, in 48 states. The lessons are grouped into three levels: digital citizenship, information literacy and media literacy, each of these taking a full year, taught in grades 6, 7 and 8, respectively. The course can be taught entirely offline, since it focuses on interpersonal skills before actual tech skills.

I’ve been teaching Cyber Civics at Shining Mountain Waldorf School for two years and the response from students and parents is thick with appreciation that we are helping students learn these skills. In the sixth grade, we also talk about digital reputation, hiding behind a screen, identity, avatars, digital drama, being an upstander, and what to do if you encounter cyberbullying or hate speech.

What Students Need
As screens and media work their way further into our lives, both at home and at school, the need to prepare our children to be safe and responsible members of the online world is as urgent as ever. Waldorf Education has always been about introducing the right topics and skills at the appropriate time in a child’s development, and so it goes with technology. This begins with addressing human capacities like the Golden Rule in earlier years, and then needs to get more explicit in middle school.

“Waldorf pedagogy was ready for this moment,” said Graber. “[It] is so well positioned to put children into the world who are critical thinkers, and then, when you layer on top of that teaching them how to use technology and teaching them about empathy — they are so far ahead of everyone else.”

“What students need is what the world needs,” declares the Cyber Civics website, which then quotes Rudolf Steiner in naming these needs: “imagination, a sense of truth, and a feeling of responsibility.” These critical human capacities also happen to be exactly what students need to become safe, ethical citizens, both in real life and in the digital world.

The questions for schools and parents then are: (1) How do we teach these topics before children enter the online world, or as Graber put it, how do we plant seeds of digital literacy while laying a “strong ethical thinking foundation”? (2) In middle school, how do we teach these capacities in relation to the internet? And (3) How does this education, especially media literacy, continue into the high school years?

Future Business Leaders
“It’s that human element,” said Graber. “When you talk to business owners around the world, they say that’s largely what young people are missing; they’re missing that empathy gene, that ability to look someone in the eye, to communicate face to face —that’s gold today.”

This reminded me of one of my first impressions of Waldorf education, before I started teaching. I was chatting with the owner of a neighborhood pizza shop called O’s, which used to be a couple of blocks from the Shining Mountain Waldorf School campus. “Oh, I can tell the Waldorf kids from the rest from the moment they walk in,” he said one day. “They look you in the eye and they are present.”

This was about 2006 or so, before the Internet took over the world, and now, years later, I realize how that simple mindful presence is still such a large part of the equation; and how finding evolving ways to teach it to students is key as they move between offline and online spaces.

Discovery
Back in the classroom, I sat back and watched the sixth graders settle into their drawing projects. Pencils and pens sketched away; hard drives and wires lay in disarray. I allowed this rare moment of quiet and concentration to linger in the classroom.

“We’re not really teaching it,” Graber said to me regarding the overarching objectives of the Cyber Civics curriculum. “We’re presenting activities where [students] discover this stuff on their own.”